So last night ended with me printing out most of the yard and leaving it on the printer. This morning I decided to tape said printout together and see exactly what kind of foot print I was looking at. Well some thirty pages later I had a yard almost 20 feet long. This is not really acceptable as that's half my layout space.

So it's back to the old drawing board. 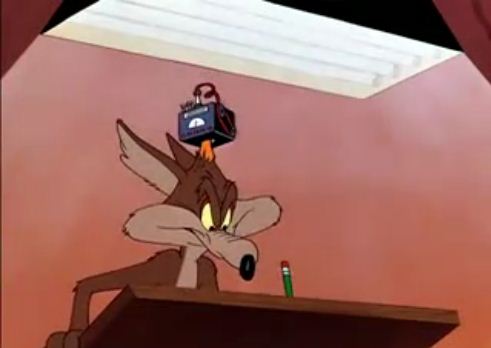 I decided to remove one length of flex from each of the ladder tracks, leaving the shortest of them at two. Using Atlas C55 flex that gives me 60 inches as my shortest yard track, not including the four #10 turnouts at each end.

Tomorrow I will reprint the yard and see how long the foot print ends up.
Posted by The Inverness and Richmond Railway Company No comments:

Inverness Yard gets tweaked, but just a little

I've spent the last week looking over my plan for the main terminus of the railway and decided I required a couple of minor changes to the yard. They're not major changes, but I decided to go with #10 for all turnouts, instead of just the ones that are off the main track with #7 turnouts everywhere else. I think this will not only look far more appealing, but ensure smoother operations of trains throughout the yard - especially with live coal loads as an operating interest.

I also decided - in the name of operational interest - to add a curved switch next to the Section House and run a short spur behind the freight house (see blue arrow). I haven't seen any evidence this actually existed, but it would make sense. Port Hood, Mabou, and Inverness received enough express freight to warrant their own separate freight sheds, whereas the other stations on the subdivision only had freight rooms as part of their stations.

Adding this extra track will allow me to spot express or LCL loads without fouling up the only track into or out of the whole yard.

The other aspect of changing turnout sizes is that it tightens up the spacing between ladder tracks, thus allowing me to narrow parts of my benchwork. Now some of you may be wondering why I would want to do that, and the reason is to add a peninsula in the center of the room.

The room that the layout is currently being designed to fit in, is 10' wide and 24' long. If I can limit a couple sections of benchwork to 12" wide or less, I should be able to squeeze in the 30" diameter balloon required at the end of the peninsula.

Besides, if you look at this Google satellite map of Glencoe, you'll see an almost perfect peninsula. The orange line on the map shows you where the old Inverness Subdivision Right-Of-way is located, and the old train station would have been located somewhere within the blue square. 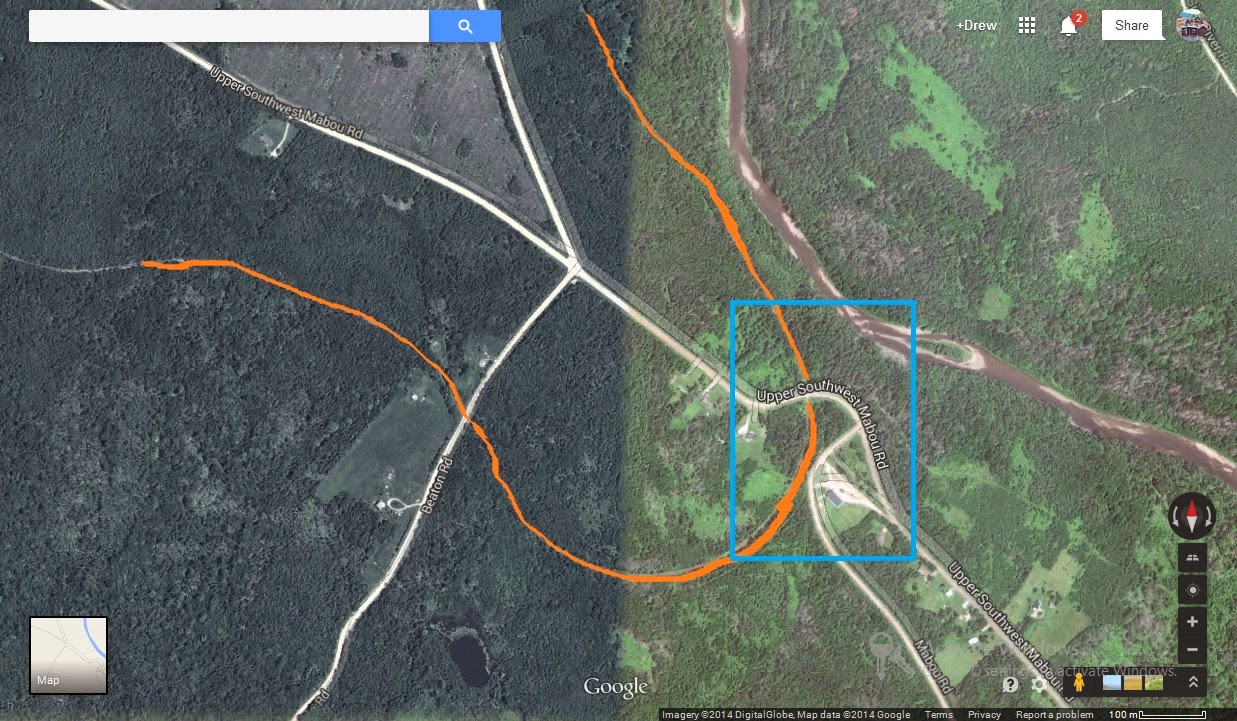 If I zoom this in for you a little more, the purple square frames the Glencoe Hall, where many a wedding reception has taken place and I've even been to a couple. I have to think Glencoe Station was located opposite the Hall next to the R-o-W, but I have yet to find any evidence to support that theory.


The last adjustment I made was to add a switch to the end of the last classification track so that it is now double-ended and not stub-ended. It's shown here with the black arrow:

I still have a few more details to work out yet, like where the coaling tower and water tower belong. They're conspicuously missing, given that the ash pit is marked on the inbound service track. I also find it interesting that the scale and the scale house were included on the c1919 drawing. I suppose the logical place for them would be in the immediate vicinity of the coal bunker that serviced the stoves in the passenger cars, or just to the left of the ash pit. Drop me a line if you have any ideas.
Posted by The Inverness and Richmond Railway Company No comments:

I'm always on the lookout for traffic sources on the Inverness line, so a couple months ago when I came across a photo of an Irving tank car online I knew I had to use it. Irving is in the petroleum industry in a big way. Everything from retail gas stations to home heating fuel. So when I ran across this little kit from a dealer on eBay: 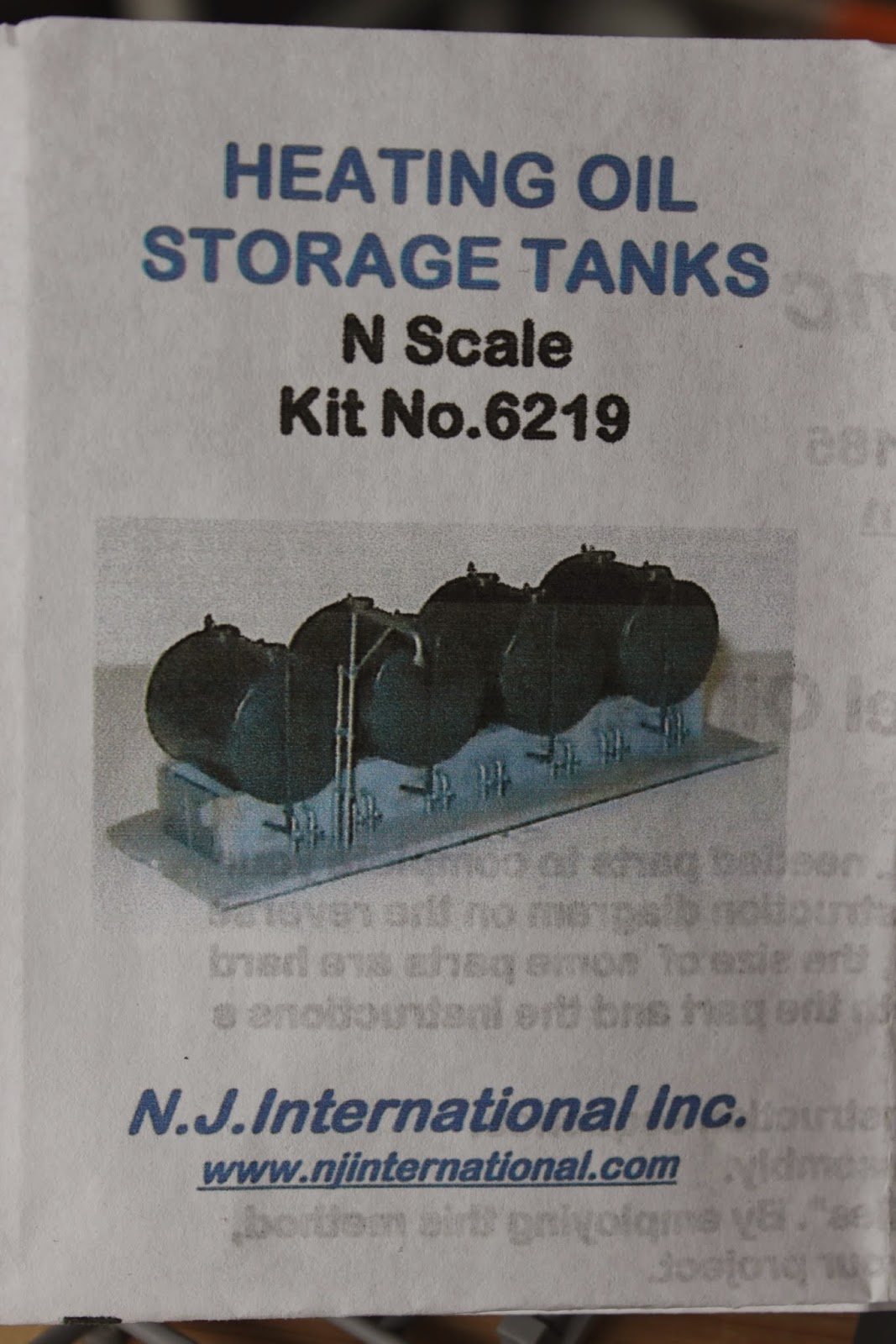 I thought "What better a place to ship an 11k gal Irving tank car than this?"

Although I haven't yet decided where to place it on the layout, I think it's going to go in Port Hood. The Co-op already has a large mill complex, and the Home Hardware, so I think it needs a residential fuel dealer too. I already have a little Walthers coal trestle to go with it.

I started by assembling the concrete piers and placing the bottom half of each tank in place.This helped keep everything even and square. Then I glued the ends on the tanks, like so: 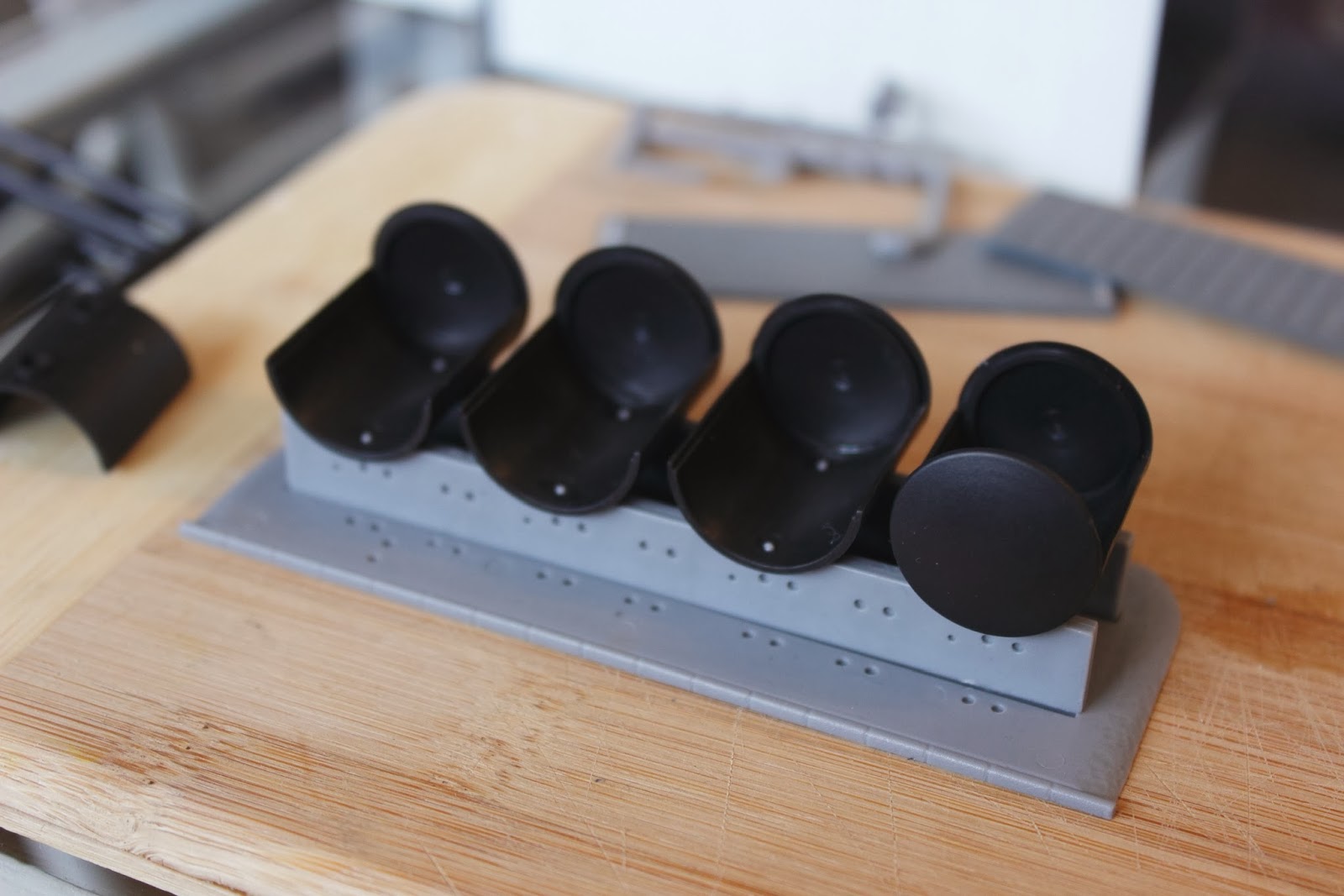 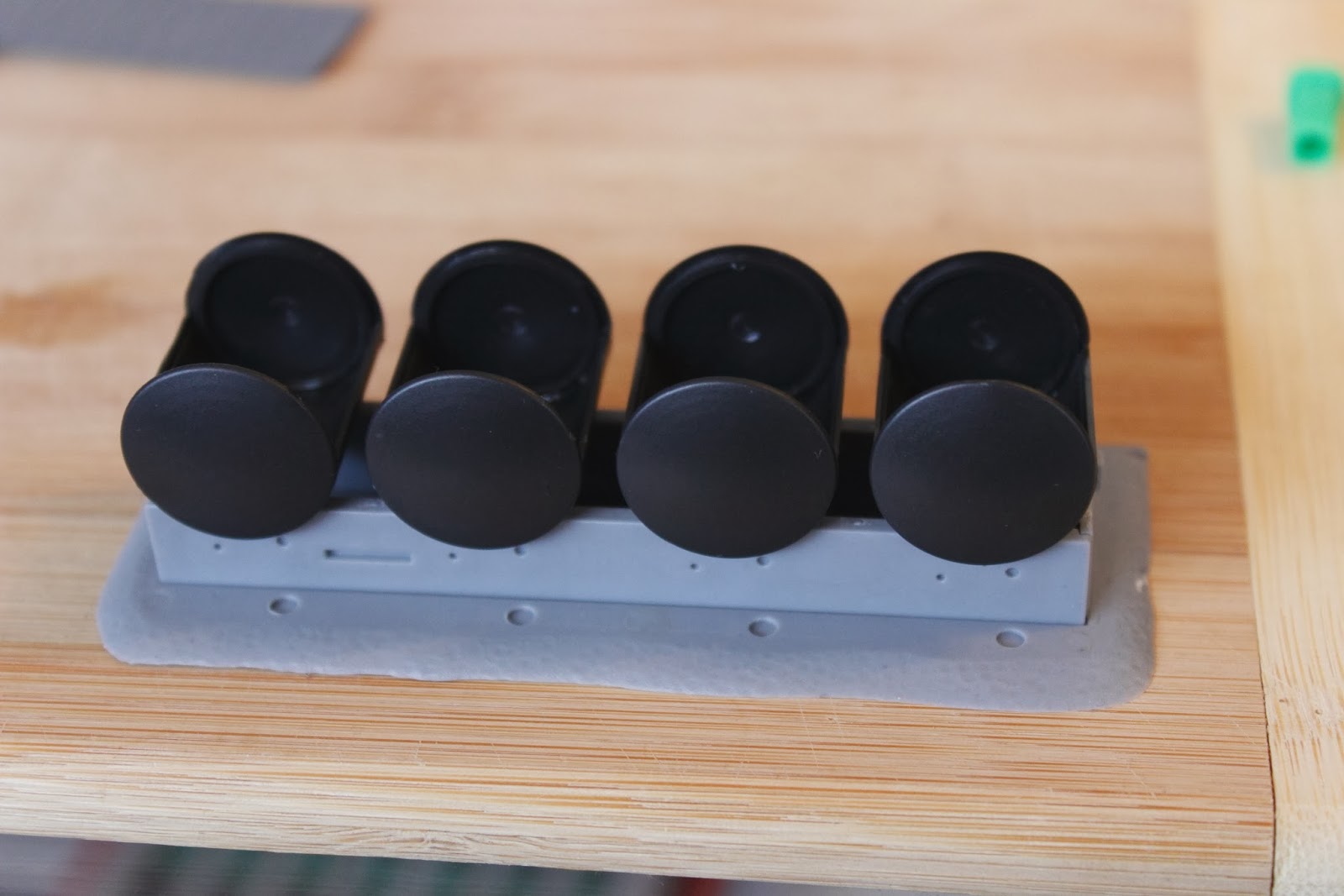 After that, I installed the access hatches in the top half of each tank and simply pushed the tops on the tanks with a couple drops of glue. 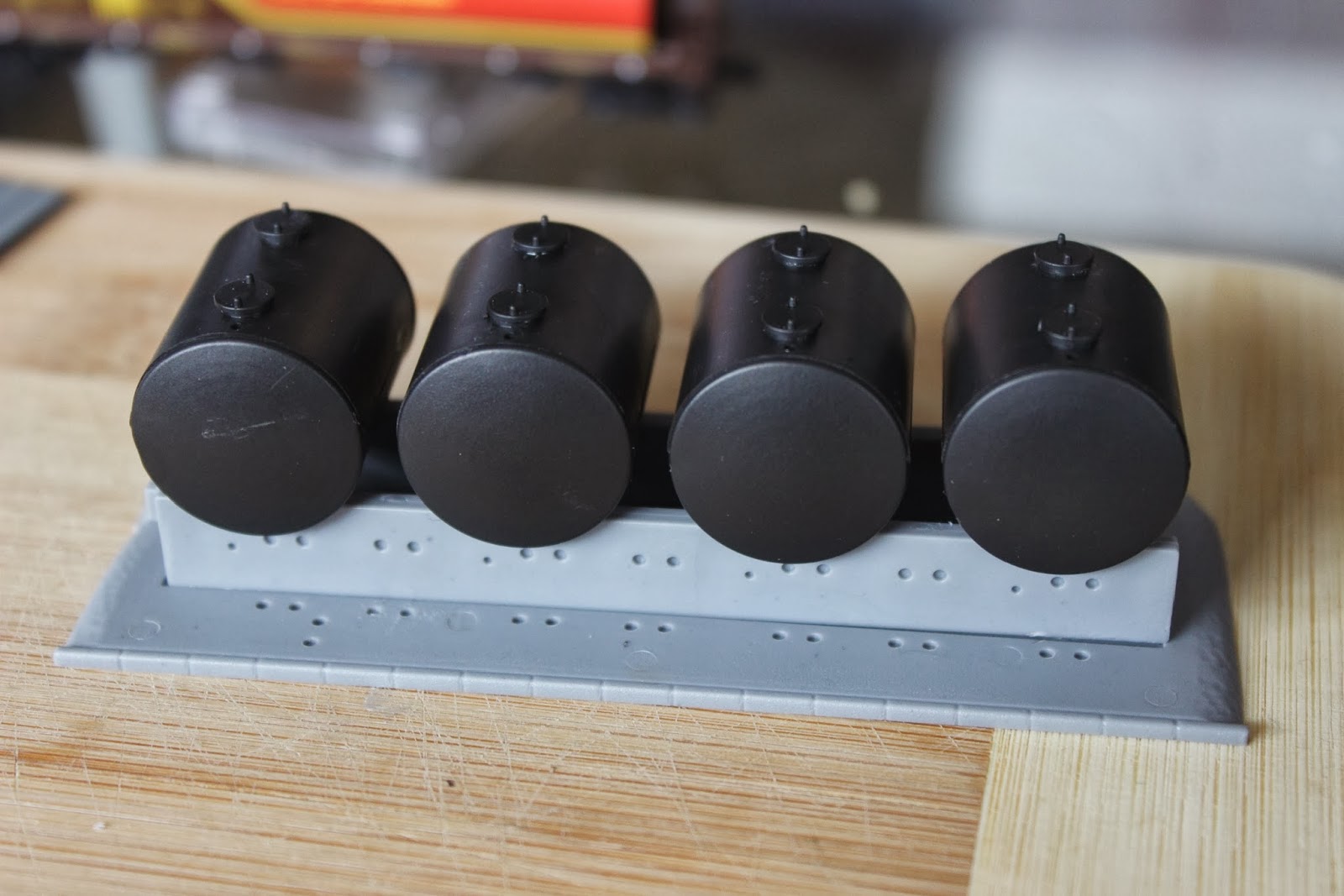 Now that I've located my good tweezers I can get to work installing all the little pipes and fittings included in the kit.The black vertical pipes were the hardest to keep in place, but they're in. All I have to do now is give the whole thing a shot of white paint - which isn't going to happen today as the balcony is currently engulfed in a snow storm. 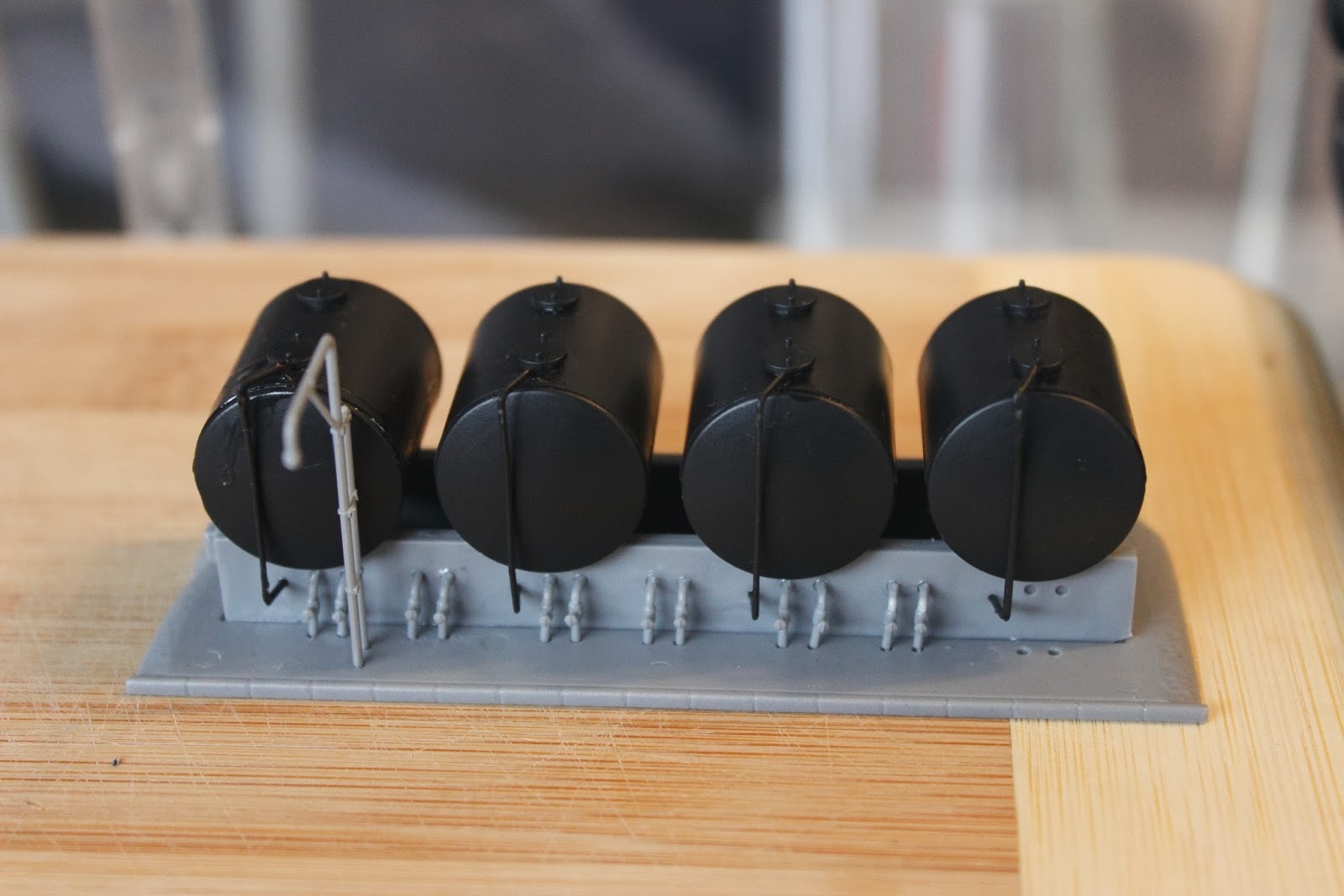 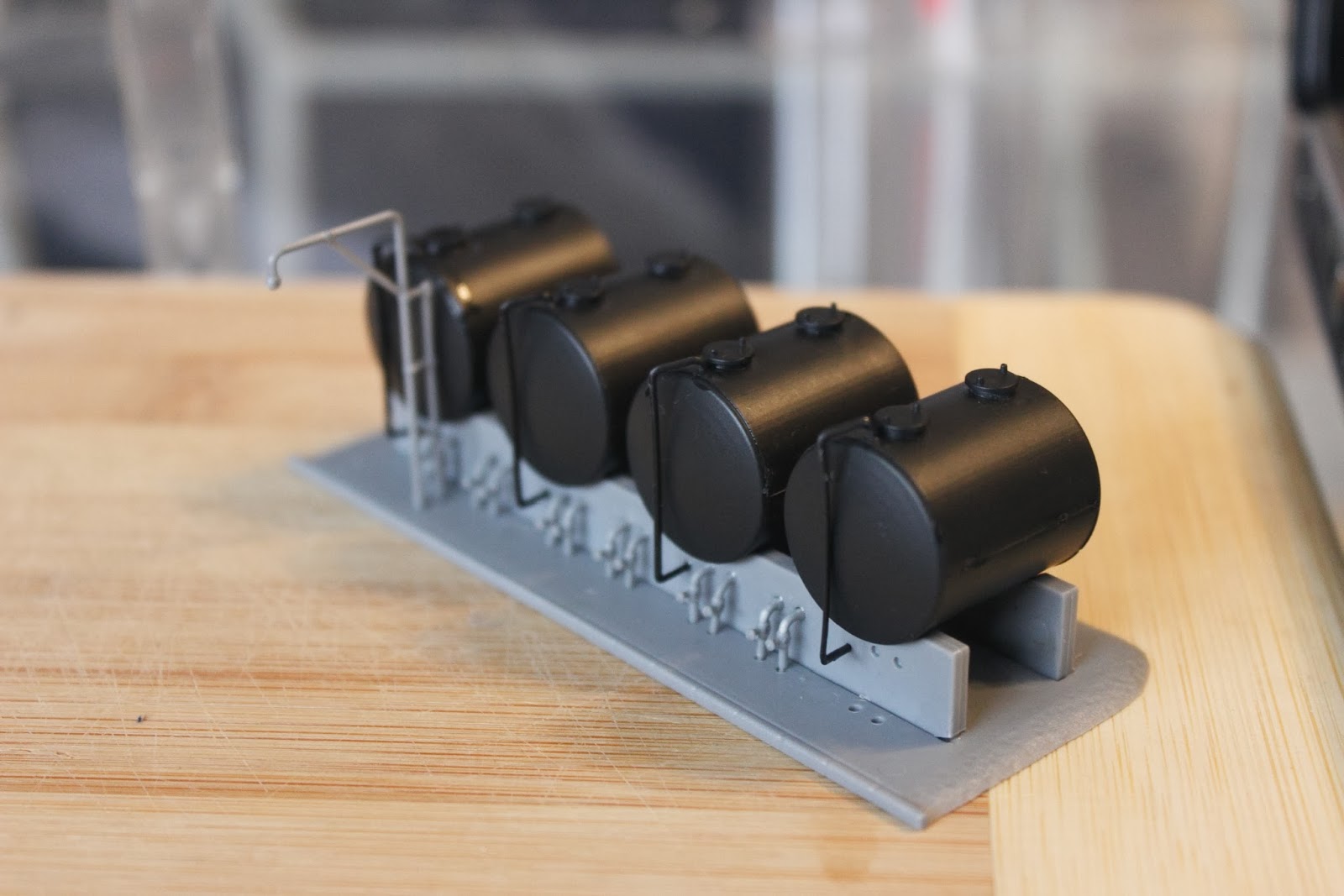 Posted by The Inverness and Richmond Railway Company No comments:

Earlier last week a gentleman on The Rail Wire Bulletinboard posted about a software project he had been working on called SCARM Train Layout Editor (Simple Computer Aided Railway Modeller). It looked promising, it was free and I was anxious to see how it compared to XtrakCad. So I downloaded a copy and gave it a whirl.

What you see below is a map of the Inverness & Richmond's main yard at Inverness, from Allister W. D. MacBean's book The Inverness and Richmond Railway. Since I'll be including this yard on my layout as it's northern terminus, I thought I would try and adapt the hand-drawn map to a CAD drawing. 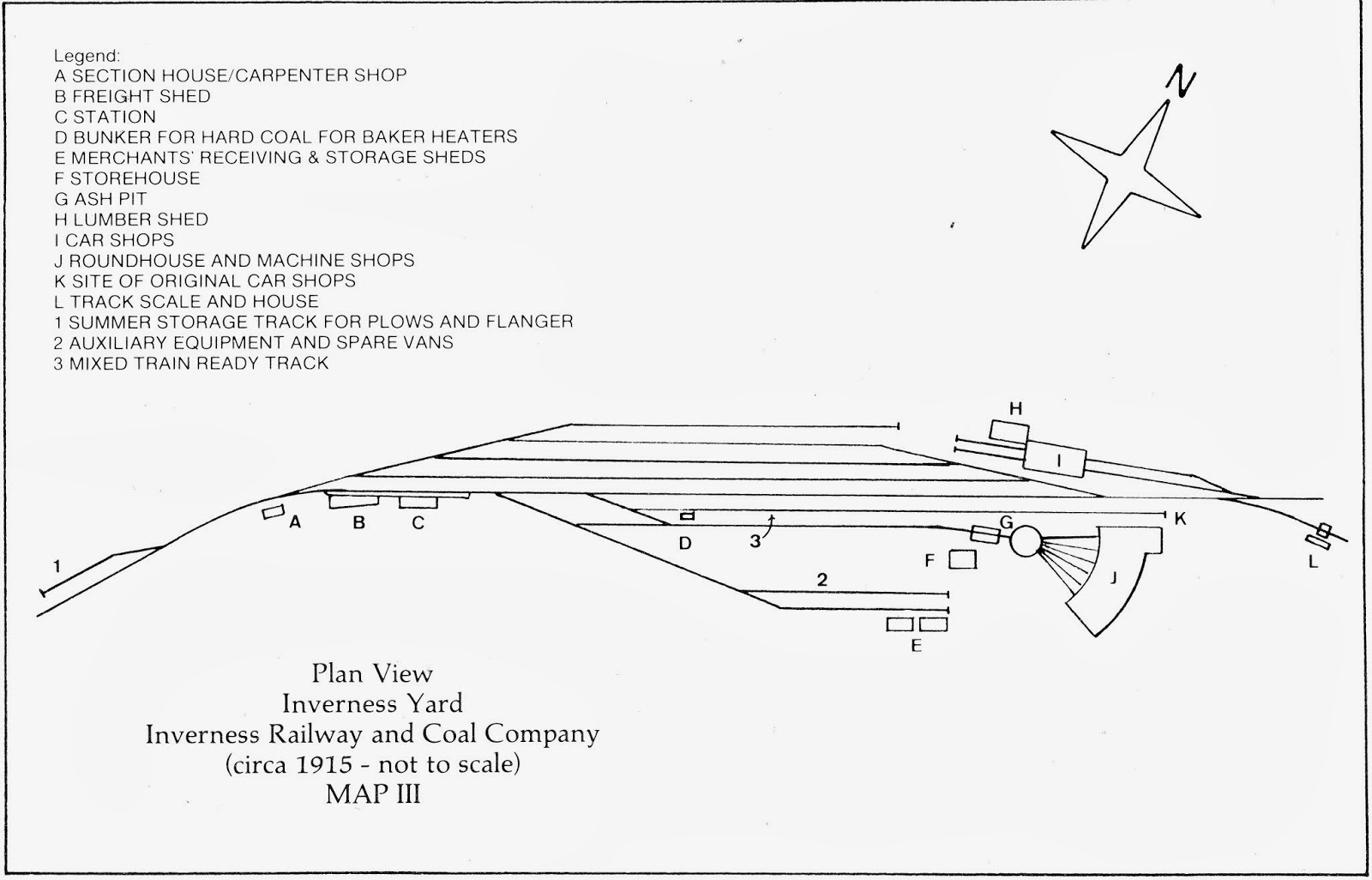 It's not drawn to scale so I had to 'wing it' as they say, but after about an hour of playing with SCARM, I think I ended up with a pretty good rendition of the yard pictured below. (I'm working on getting a bigger view of this)

While there are almost 90 different track types to choose from,  most are of European origin like Hornby, Fleischmann, Marklin and Trix. Included however are 9 types from Atlas, and I've chosen to use their Code 55 line of track because I think it has the best appearance.

So there you have it - Inverness Yard drawn in CAD. I printed it all out in 1:1 scale yesterday, on about 30 sheets of paper that I now have to tape together. I'll show you that later.

Posted by The Inverness and Richmond Railway Company No comments:

The Inverness and Richmond Railway Company
Burlington, Ontario, Canada
A place for me to ramble on about building a model railway. Don't say you weren't warned.